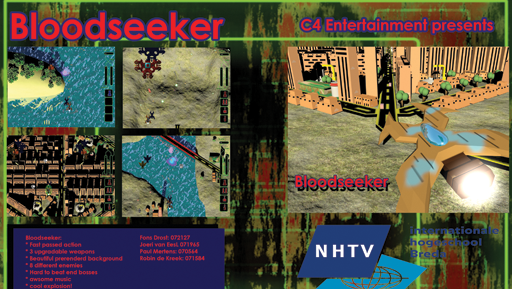 Bloodseeker was made during my time at the NHTV Game Architecture and Design in 2008. It was the final gamelab project of the 1st year.

Gamelab was a course in which students build a game together. We we're put in groups and worked for the whole semester on one game. We we're given some restriction and guideline. One of these was that we had to pick a game type. We opted for an top down scrolling shooter.

The goal of the game was to defeat the boss at the end. The boss digs himself in the sand though and the player can only hit him when he's on the surface. Before getting to the boss the player had to shoot down the different enemies. The game seemed to be more about dodging the enemies then shooting them though.

My role on the project
I stared off as concept artist for the game. I later discovered though that painting the background wasn't my strong point. Our team lead/design lead had to quit the project since he was leaving the education. So I took over. From that point on my tasks was directing the team, doing the team administration and finishing the design document.

The art
All the art you see in the game has been made in maya aside from the ui. For some way I ended up being responsible for the menu screen and box art.

newest projects
back to top project

All content on this site belongs to it's rightfull owners.